This show just barrels forward with it’s built in continuity and it seems that Eric Kripke, the creator of SUPERNATURAL is a bona fide creative genius. The series started out as a standalone episodic procedural show (procedural = basic concept, formula that follows through with every episode, for my non TV geeks) that anyone could jump into mid season. The same can no longer be said with Season 3 of the coolest TV series on the air, SUPERNATURAL.

Season 3 really develops a SUPERNANTURAL universe, exclusive to the show with a hoarde of supporting characters, recurring storylines, grander scheme plot points that span the 3 seasons so far… to the point that each episode now has it’s own specific recap, relevant to each episodes content. But first things first: Hallelujah the yellow eyed demon is dead and gone, finally!! Now, we ended off Season 2 with Dean the ultimate sacrifice by selling his soul in exchange for Sam’s life. So Season 3 starts off with us seeing how Dean is reacting to his short time remaining; he does so by initially not giving a shit about his life anymore, having bacon double cheeseburgers for breakfast, becoming even more reckless in hunting and just enjoying the time he has left. This obviously causes Sam to try to do anything he can to save Dean’s soul. We’re also introduced to Ruby, a demon ally of the boys who claims she wants to train Sam in preparation for the upcoming war. At the same time, there are hundreds of Demons running rampant after the Hell’s Gate opening in the Season 2 finale.

It’s break neck speed ahead during this entire season for the boys as they try to deal with the coming war with no info to go on, as well as save Dean’s soul only to find out that there’s a big new demon daddy in town out for Sam’s life… who just happens to be a mommy. The pacing of this season is extremely fast, as every episode has a revelation or creates a new story arc that relates to the over all grander picture. We also get to see the start of the rifts forming in Dean and Sam’s relationship, with secrets and withholding information from one another.

The only downside to this season would be that, for someone not into SUPERNATURAL, it gets very difficult to get into the show at this point, as before every episode, the viewer needs to be caught up on everything in the series so far, to be able to understand the episode itself. 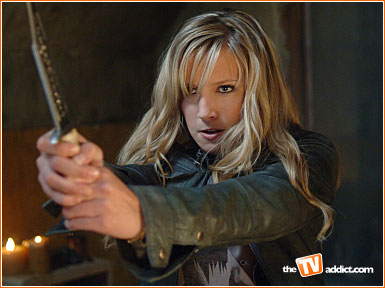 Season 3 of SUPERNATURAL also introduces some awesome supporting characters. Like I said the demon Ruby pops in and out of the boys lives, saving it majority of the time, and other times she dangles the bait of being able to save Dean in front of Sam and gets him to trust her. Why? We don’t know yet. There’s also Bella, a super thief of supernatural items… who’s just a big pain in Dean’s ass. We also get to find out what exactly the yellow eyed demon’s plan with Sam was and the repercussion of this death. Season 3 also has what I would consider to be the BEST cliffhanger of any series that I’ve seen so far. I mean its BIG… like, hell freezing over big. (if only)

Get Season 3 On Blu ray