Movie Review: THE WOMAN IN BLACK (2012) – Harry Potter All Grown Up

As many will attest, I am not a fan of Horror movies. I loathe them. I have many reasons, but I find the genre to have become gratuitous and exploitative in the last decade or so. However, I decided to watch one ‘horror’ flick recently, solely because I was curious as to what Harry Potter was doing after his films ended. I was pleasantly surprised by both Daniel Radcliffe’s performance in THE WOMAN IN BLACK, as well as the movie itself.

Following the formula of the traditional horror / ghost movie, THE WOMAN IN BLACK features a story about the tragic death of a woman. The reasons surrounding her death cause a small town to be haunted, and the arrival of a Lawyer into the house where she died, kick starts a chain of events that the young Lawyer has to unravel, at the risk of his own life. 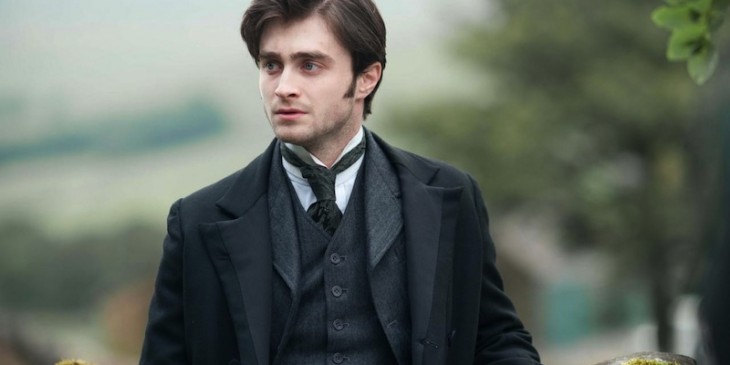 harry potter’s all grown up *sniff..

THE WOMAN IN BLACK is a very simple and straightforward movie; showcasing the typical ghost story we all know and love. However, such a movie after so long and after so many films of bloodletting and gore, is incredibly refreshing.

This movie relies more on the traditional, dare I say, classic elements of horror films through the use of the music, the actors’ performances and over all unwavering camera work to invoke the scares. There are no rivers of blood or gaping wounds or hysteric screaming. There is simply Daniel Radcliffe.

much better weapon than a wand…

THE WOMAN IN BLACK is his first movie after the HARRY POTTER Films, and man does he knock it outta the park! The entire film rests solely upon Radcliffe’s shoulders. Unlike the Potter films, there is no veteran-supporting cast to take the weight of the film off of him.

Radcliffe gives us an intense performance of a man that wants to provide for his son, and facing supernatural concepts and possible death in order to do so. It’s a great role, majority of which is spent being on screen completely in isolation and reacting to the scary house. It’s superbly played by the young, former child actor.

THE WOMAN IN BLACK is an out and out ghost tale. It’s a classic approach that was all but forgotten. The intense music rising and falling at appropriate times, the suspense driven revelations of the story and the eerie house are all staples of the ghost story, properly utilized after a long time.

It’s a short movie, which works to its advantage as the slow moving scenes could’ve been dragged out if it was longer than it was. Here’s hoping that Radcliffe continues his foray into grown up cinema with more dramatic work such as THE WOMAN IN BLACK.

Get The Blu ray


How do you feel about Daniel Radcliffe’s grown up movies?

“but I find the genre to have become gratuitous and exploitative in the last decade or so.” Well, the genre has always been like that – nudity and exploitation go hand in hand, which is always refreshing and comforting in a way.

To go so far as to “loathe” horror films, isn’t it a bit TOO much? I mean, I dislike rom-coms for example, I hate them, actually. But I don’t loathe them as there are a few (counting them on the fingers of a hand) that are actually worth watching.

“refreshing and comforting” lol… I have to agree with that.
You know, I was going to reply to your comment by pointing out the things I don’t like about the Horror genre. I realized that the words I was going to use, (predictable, similar, cliche, overused, formulaic, etc) can be applied to any genre really that’s been around for as long as Horror has. And I have no apprehension about those other genres.

So given that there’s no objective way for me to defend ‘why’ I dislike / loathe Horror (I used ‘loathe’ as a synonym for ‘hate’ by the way, since I don’t really have varying degrees of ‘hate’) the simplest answer is, it doesn’t appeal to me personally.
It was my mistake trying to justify that with reasons in my post… Apologies.

I do watch the occasional Horror, but it has to be above and beyond ‘just another horror movie’ and something has to stick out, for me to pay attention. Like the above movie was.

Well, that makes sense. How do you feel about rom-coms, then? 🙂

Similarly actually. I usually go ‘ugh’ everytime I see the Trailer for one. Unless it has stars I like, or something else going for it.

I ‘ugh’d at CRAZY STUPID LOVE, but ended up loving it. Was a plane viewing. 😐

Crazy Stupid Love is very fun and funny, yeah! That was my point as well, I don’t like them at all but, sometimes, I find some really cool ones.

I agree. But I seem to not have that patience with Horror. :p

Not the scariest thing in the world, but still has some spooks here and there to really get you in the mood. Good review Shah.

Thanks man. It’s not the scariest, but I was engaged, which is very difficult to do to me in this genre. Especially considering how slow it was.

Thanks for stopping by!

TIFF 2022: THE FABELMANS Finds Truth In Reality, Through A Lens

The Fabelmans movie review discusses Steven Spielberg's most personal movie to date, unlike his usual blockbusters.

TIFF 2022: Forget Proper Representation WHAT’S LOVE GOT TO DO WITH IT Is Barely A Proper Rom-Com

What's Love Got To Do With It, a rom-com about cultural differences fails at both being a rom-com and an inter-cultural love story.

TIFF 2022: RAYMOND & RAY Has A Familiar Premise That Goes To Weird Places

The Raymond & Ray review straight out of TIFF '22 showcases a familiar sibling drama that gets real unexpected real quick.