Movie Review: THE PURGE (2013) – A Thriller That Hits Close To Home

Conceptual films with a gimmick based set up are always fun to watch. The story is not meant to be logical or on point, but rather enjoyed without any regard for rationality. THE PURGE was supposed to be such a movie, but it was far more enjoyable than your typical action fluff. Here is my Movie Review…

Blank Page Rating: 3 out of 5 Stars 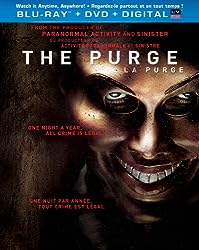 In the recent future, crime and violence in a new U.S.A. has been almost eradicated, due to the implementation of a new law that grants immunity to any and all crime on a certain day of the year. So for 12 hours a year, all illegal actions are allowed, including but not limited to, murder; thereby allowing the population of the country to be civil members of society during the rest of the year. It`s a good concept, though it makes you wonder how some pseudo-psychological animal instinct theory was collectively embraced by a government in the first place.

The story starts with a successful salesmen played by Ethan Hawke, coming home after work to settle in with his dysfunctional family, hours before the annual Purge starts. The family is nothing out of the ordinary; the hard working homemaker played by Lena Headey (Game Of Thrones) along with a pre-teen son who has doubts regarding the morality of the Purge , and a teenage daughter with boyfriend drama.

During a routine Purge, when this family is snug and cozy locked into their massive house, the son breaches the security to provide refuge to a stranger, who was being assaulted by a group of murderous citizens, thus bringing their wrath upon the rest of the family as well. It`s a great conflict, one that immediately creates many moral debates and conundrums for the audience.

Ethan Hawkes James has to decide to return the stranger to the murderous mob outside, condemning an innocent man to save his own family, or risk all their lives from, literally, the thugs at his front door. It’s emotionally riveting as James never once considers the alternative and is willing to sacrifice the stranger, until his family chimes in. Unlike most dysfunctional family stories that start off with everyone apart, but closer by the end due to the events of the story, THE PURGE uses this so much more effectively. Faced with death, the family comes together under the direction of their father, who up until now has been loathed as a spineless drone.

The performances here are amazing. There are no convoluted scenes of unnecessary heroism, or sub plots that tie into the grand story. The homemaker doesn`t strap on an AK-47 and kick ass. The nerdy son doesn`t display a breakthrough moment of bravery or assertive-ness. Marital issues aren`t reconciled.  The realism of the action scenes effectively enhances the suspense of each scene and plays up the drama very appropriately. The brutality isn`t out of place or unnecessary. It`s frustrating watching THE PURGE and wondering why Ethan Hawke doesn`t do more movies, as the man is a brilliant performer of human emotion. He begins the movie as a revolting salesman, but by the end, transforms into an utterly desperate father and husband trying to keep it together.

Not that there aren`t any flaws in THE PURGE, there are actually many. Stealing a page from clichéd horror films, the main characters, basically everyone but the father, keep splitting up and running away from one another in the dark and dangerous house, during fits of emotional diarrhea. Someone says something, some one gets upset, they run around the house creating unnecessary tension, drama and frustration (for the audience as much as Ethan Hawkes character) only to reunite with each other with regret. Another overused aspect of the film is the repetition of the last-minute-unexpected-save scenes. Multiple times does it look like a character is done for, only have someone come to their rescue at the last possible minute.

Needless to say I still enjoyed THE PURGE, despite its issues, maybe because I had low expectations to begin with. For a movie rife with political consequences and other opportunities for grandiose filibustering, the writers keep the story isolated to this small family and showcase any and all ethical debate about the plot point, through the actions of the characters and avoid long monologues of morality.

TIFF 2022: THE FABELMANS Finds Truth In Reality, Through A Lens

The Fabelmans movie review discusses Steven Spielberg's most personal movie to date, unlike his usual blockbusters.

TIFF 2022: Forget Proper Representation WHAT’S LOVE GOT TO DO WITH IT Is Barely A Proper Rom-Com

What's Love Got To Do With It, a rom-com about cultural differences fails at both being a rom-com and an inter-cultural love story.

TIFF 2022: RAYMOND & RAY Has A Familiar Premise That Goes To Weird Places

The Raymond & Ray review straight out of TIFF '22 showcases a familiar sibling drama that gets real unexpected real quick.