It’s a huge complaint of mine when Bollywood movies can’t keep a consistent tone and genre throughout its runtime, resulting in a potentially amazing movie which becomes a pandering commercial film for the masses. Here’s my Review of a movie that I think had the most wasted potential of 2013, ‘Dhoom 3’. 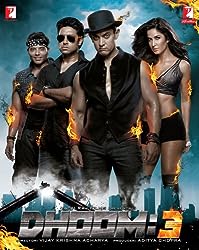 The ‘Dhoom’ franchise is a weird one. Each sequel has glorified the antagonist by casting a major actor in the role, while sidelining the leading protagonists to almost being supporting cast members. ‘Dhoom 3’ rounds out this progression by having the entire movie be about the antagonist, or rather somewhat anti-hero of the movie played by the legendary Indian actor, Aamir Khan.

this shot, the framing is taken from ‘The Dark Knight’.

An Indian thief is seen robbing one specific bank in the city of Chicago, requiring India’s best cop, played by Abhishek Bachchan, to have to be called in, along with inept comic relief sidekick played by Uday Chopra. The thief is none other than Aamir Khan’s Sahir who is targeting this bank due to their hand in bankrupting his father, holding them responsible for his subsequent suicide as a result. Using his circus as a cover and his skills at pulling the wool over the eyes of the masses, Sahir has grown to be a charmingly deceptive thief who befriends Bachchan’s Jai, only to betray him. The film takes a startling turn in it’s second half becoming a completely different film, but definitely for the better.

‘Dhoom 3’ is a splintered movie. There is so much emotional depth in the latter half that the ridiculously unrealistic action and just horrid comedy scenes from earlier can almost be forgiven, if they didn’t resurface in the end. It’s entirely Aamir Khan’s show (pun intended) as he takes over the story in a performance that is both sweet and intense. Sahir’s origin is told in multiple flashbacks throughout the film, adding depth and causing the audience to empathize with him, despite his morally duplicitous ways. While in stark contrast, Bachchan and Chopra are relegated to having side roles.

at least the motorcycles made a comeback this time around…

There’s a point near the end when Jai even acts as somewhat of an antagonist. The previous installment of the franchise has Jai’s pregnant wife be another source of comic relief, but seeing him casually flirting with the hotty of this film, an American cop, makes him come off as kind of shady. Uday Chopra’s Ali has had literally zero character growth, which is dumbfounding given that he’s supposedly partner to a ‘top cop’ of India. Ali also gets the exact same gag as the other movies. Katrina Kaif seems to be satisfied being the window dressing in yet another role where she does nothing. Jackie Shroff regales in an emotionally significant cameo.

‘Dhoom 3’ while an enjoyable and fun Bollywood movie, is one that would benefit from significant rewrites and would have been an amazingly well done heist movie if it had not been part of a franchise that caters to the commercial extravagance of filmmaking rather than the core concepts of storytelling.

Get the Blu Ray & Soundtrack:

The Kacchey Limbu movie review is all about a wholesome family entertaining featuring sibling rivalry and finding one's path in life.

My Zwigato movie review comes straight out of TIFF 22, about a man trying to provide for his family in a newly evolving economy in India.